The Hong Kong Museum of Art (HKMoA) is scheduled to reopen at the end of this month, following a four-year refurbishment.

It was a project that we were closely involved with, supplying high specification internal screens and fire-resistant unlatched doors.

Established in 1962, HKMoA was the first public art museum in the city, and is dedicated to both traditional and modern art.

It has a collection of over 17,000 items and, underlining its popularity, about 400,000 people a year visit the museum.

Wrightstyle was also recently involved on the refurbishment of the Royal Academy of Arts, the UK’s oldest arts institution.

Most recently in Hong Kong we supplied our SR60 curtain walling system into a three-sided glass corridor for a residential building’s clubhouse rooftop areas.

We also conducted specialist fire testing for a joint transport and education project.  That was for a resource centre for children with special educational needs. 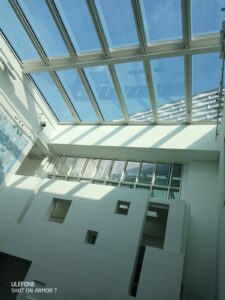 Over the years, we’ve also supplied to a number of, residential, healthcare and transport projects in Hong Kong.  These include Langham Place, a landmark regeneration project.

Wrightstyle systems were installed across seven floors.  They are to protect walkways between the main building and the shopping areas.

Advanced glazing systems are particularly important in high-value buildings such as museums and art galleries.  They have large internal spaces filled with expensive or irreplaceable contents.

But one of Wrightstyle’s flagship projects in Hong Kong was for roof glazing to a data hub for a major financial institution.  That underlines how the value of a building’s assets can be measured in different ways.

Wrightstyle’s advanced and comprehensive ranges include external and internal glazing systems, all certified to US, European and Asia-Pacific standards.