It’s a long time since we’ve been able to enjoy any retail therapy.

Going shopping for non-essentials might seem a bit strange, with social distancing and hygiene measures.

But it is a small step towards the new normal that we’ll all have to get used to.

It’s also a reminder to us at Wrightstyle that we’ve been much involved in the retail sector over many years.

Not only have we supplied to many retail projects, large and small, we’ve also helped repurpose buildings as retail destinations.

For example, in 2010, we helped to transform the media hub for the 2004 Games of the XXVIII Olympiad into one of Greece’s foremost retail centres.

It was, and is, a good example of legacy planning for all Olympic Games: taking a building built for one purpose and turning it into something else.

After the 2012 London Games, we also helped to turn that event’s media centre into a new business destination, Near East, for media and high-tech companies.

In Athens, and working in close partnership with a local aluminium systems company, we designed and fabricated a secondary steel system inside the existing aluminium framework to provide 60 minutes of fire protection.

Underlining one of our key strengths, the main 500 square metre curtain wall grid was manufactured and delivered on site in just four weeks.

We’re especially proud of our retail refurbishment record, because retail can be a catalyst for greater change for cities.

For example, in Beirut, the Lebanon, where we supplied glazing systems for the redevelopment of the Solidere Beirut Souks. 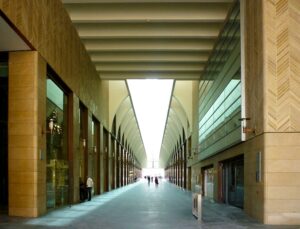 It created the country’s largest shopping area (pictured above) at 163,010 square metres, with over 200 retail outlets and other leisure spaces.

Most importantly, it brought back to life an area of the city that had been badly scarred by the country’s civil war.

For that project, we supplied large-span curtain walling, as well as thermally-broken window assemblies.

Another landmark project was Ocean Terminal in Edinburgh.  This major retail destination is also home to the Royal Yacht Britannia.

The building, opened in 2001 and designed by Sir Terence Conran, has played a key role in the regeneration of Leith, Edinburgh’s port.

Our systems, covering the entire frontage of Ocean Terminal, were chosen because of their ability to withstand high wind-loading.

But not just that, because the overall glazed span at Ocean Terminal is over 16 metres in height.  The largest individual free-span is over 10 metres with grid centres of four metres.

Another landmark project was Langham Place in Hong Kong.

Our systems were installed across seven floors.  They are to protect walkways between the main building and the shopping area.

They therefore protect important escape routes in the event of fire.

That’s what good retail regeneration can achieve, acting as a catalyst for new housing and other infrastructure projects.

But central to all shopping centres is the absolute requirement for fire safety.

We are proud to have supplied our internal and external advanced systems internationally, to retail projects of all sizes.

In the meantime, shop safely!

Photo by freestocks on Unsplash