The UK market for passive fire protection products is estimated to be worth around £650m.

In the last couple of years, the market has grown by some 2%.

This was a period of recovery for the overall construction industry, especially in the education, commercial, retail and leisure sectors.

However, looking ahead, forecasts suggest a more subdued performance, with lower levels of construction activity.

This is being caused by lower investor confidence in the lead-up to Brexit.

But new build isn’t the only market.

For us, a significant part of our business lies in the past, including our rail network.

Passive Fire Protection in our Stations

For example, we’re working at Paddington station on the underground Crossrail project, to fabricate monumental glazed arches (pictured). We did a time lapse video of the onsite glazing of these arches – see it here: Paddington Arches Timelapse IMG_9636.

The over-ground station, one of the masterpieces of its chief engineer, Isambard Kingdom Brunel, has Grade 1 listed status.

Another railway project was at King’s Cross station where we replaced ground-level frontage.

Our involvement with King’s Cross didn’t end with the railway station itself.

Because it was part of a wider regeneration of the King’s Cross area, a project that is creating 50 new buildings, 1,900 new homes, 20 new streets, and 10 new public parks and squares. 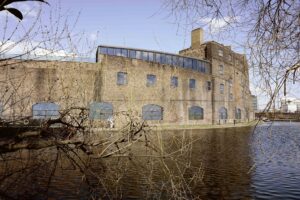 We were involved with the redevelopment of the Fish & Coal buildings, pictured above, which sit alongside the Regent’s Canal to the rear of the station.

Dating back to 1851, as part of Lewis Cubitt’s design for the station’s goods yard, they were used as offices to monitor the flow of freight.

Each arched opening was laser scanned to ensure a perfect fit, another example of using modern technology on historic structures.

These projects were all about upgrading the past to create functional buildings that meet modern standards.

It’s an expertise that extends worldwide, with railway projects also completed in the USA and Hong Kong.