The story goes that travellers heading north on 18th and 19th century mail coaches from London would stop at Stony Stratford near Milton Keynes.  The original road, built by the Romans, is now the A5. 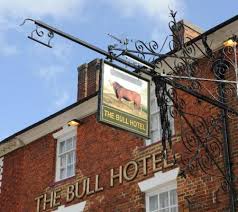 Travellers would refresh themselves in one of the town’s two main coaching inns, The Cock or The Bull, where fanciful tales and so-called news would become hopelessly embellished.

It’s a phrase the glass industry became familiar with when, in the wake of Hurricane Andrew and the Oklahoma bombing, we began to develop new glass and framing systems to withstand the huge pressures generated by super-storms or terrorist attack.

But there were few architects and designers who believed that glass, inherently fragile, could be reinvented as a super-strong product capable of defying the worst that nature or human nature could throw at it.  Cock and bull, we were repeatedly told.

But that’s exactly what has happened.  Modern glazing systems are now so advanced that they can withstand the detonation of an adjacent lorry bomb, or fire protect a building or its escape routes for two hours or more.

At Wrightstyle, we know this to be true because we’ve blown up 500kg of TNT-equivalent explosive next to one of our systems, and undergone extensive fire testing in the UK, USA and Far East. 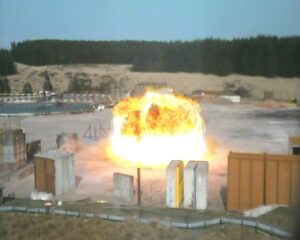 While our advanced systems can be found worldwide, they are also protecting high-value buildings in, for example, Hong Kong – a typhoon area, where wind loading is a particular factor for specifiers.

As an example of how far glass and glazing has come, compare our blast testing with the infamous Gunpowder Plot and the 2,500kg of gunpowder that Guy Fawkes hid under the Houses of Parliament with the intention of blowing up King James I on 5th November 1605.

It’s been estimated by physicists from the University of Wales’ Centre for Explosion Studies that the amount of explosive that Guy Fawkes and his co-conspirators had hidden in the Westminster cellars would have caused devastation over a 490-metre radius, and broken windows a third of a mile away.

Another explosive expert, Dr Sidney Alford, has calculated that Guy Fawkes placed 25 times the amount of explosive that he needed to devastate parliament and kill the king – a mere 100kg of gunpowder would have been enough.

That calculation, with gunpowder and TNT being roughly equal in their explosive effects, means that our landmark lorry bomb test successfully passed – by a margin of five times – what Guy Fawkes would have needed to destroy parliament.

In other words, modern glazing systems can absorb blast and high wind-loading pressures that were unimaginable just a few years ago.

And that’s not a cock and bull story.

The origins of cock and bull quite possibly go back to talking animals in ancient folk tales.  Also, a French term ‘coq-a-l’âne’ from the early 17th century translates as “from rooster to jackass” and loosely means an incoherent story.  The first mention of ‘cock and bull’ stories in English comes from Robert Burton in The Anatomy of Melancholy, 1621: “Some mens whole delight is to talk of a Cock and Bull over a pot.”  Most likely, the phrase is therefore about cocks and bulls, rather than stories told in the Cock and the Bull.  There again, who knows?