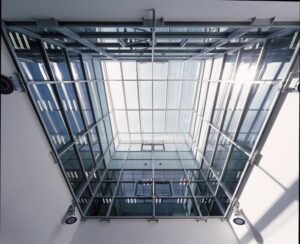 Wrightstyle has been at the forefront of fire testing its assembles to EU, US and Asia Pacific standards, including live bomb testing, and says that some building designers are still relying too heavily on fire test certifications where the glass and framing systems have been tested independently.

The company emphasises that in a fire situation the performance of any glazing system relies on compatibility between the glass and its framing system and that, if one fails, both fail.

In a fire, the sudden venting of oxygen caused by a glazing system failure can have a significant and catastrophic effect on rapid fire growth – at worst, leading to back-draft or flashover, two of the most feared scenarios faced by fire fighters.

Wrightstyle believes that current computational models, primarily to address radiation heat transfer, do not necessarily address the issue of system integration. While both the glass and framing system may have been subject to fire testing, and therefore compliant, only tested compatibility will guarantee absolute system performance when it is most needed.

In some jurisdictions, Wrightstyle has gone further by only providing project-specific certification, ensuring that each contract is specified against an accurate assessment of the level of fire protection required and the most appropriate, and tested, system to meet that requirement.

It’s a serious issue as fire kills an estimated 195 000 people every year – and that doesn’t include deaths from, for example, scalds or electrical burns for which international data is not available. Fire-related deaths alone rank among the 15 leading causes of death among children and young adults.

“That places much greater emphasis on the integrity of the testing regime. In particular, some testing criteria, such as creating a fixed breakage temperature for the hot layer, are simply an inadequate means of testing the glazed element within its framing system,” he said.

In addition, many computer models do not have the capability to model room fires that are suddenly flooded with a new source of oxygen because of window glass or internal glass screen breakage. In other words, actual fire testing – rather than computer modeling – is a far better guarantee of fire safety.

Wrightstyle’s internal and external steel and glass systems have been internationally tested together, and subjected to furnace temperatures of well over 1000˚c – testing the strength of the glass, the protective level of the framing system, and their overall capability to maintain compartmentation in a fire situation.

This is the core function of an integrated glass and framing system: to provide an effective barrier against the passage of fire, heat and toxic gas and, by preventing oxygen from reaching the seat of the fire, inhibit its progress. This allows people to escape and, by containing the fire, minimises fire damage.

“In today’s buildings, with extensive use of glass as a fire barrier, designers should always be aware that a glazing system is more than the sum of its individual parts. Both the glass and its frame may have fire test certification, but the important element, which computational modelling cannot fully address, is how those discrete elements will behave as one assembly,” said Lee Coates.