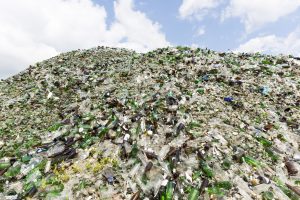 In the USA, September is Glass Recycling Month.  Jane Embury, our marketing director, takes a look at the wonders of glass – and suggests that we should also have a glass recycling month.

As a building material, glass is both ubiquitous and timeless.  It’s been with us, in the form of obsidian from volcanoes, since the Stone Age.

In the form we know it now, glass has been around since at least 3,000BC when the Egyptians, Syrians and Mesopotamians mastered how to make it.

Since then, the history of glass has been largely about its functional and decorative development – from the beauty of the Portland Vase to the rose windows of Notre Dame cathedral.

But the history of glass is much more than that and has, in a very real sense, helped shape the modern world in which we live.

So for a moment, let’s forget about glass as a material for life’s fripperies, like windows or wine glasses.  Let’s not forget about the 13th century invention of the spectacles, which added years to the useful lives of scientists.  In the 17th century, the Dutch philosopher Baruch Spinoza also made his living as a lens-grinder.

The humble mirror also has its part to play, used by the 14th century Italian architect and engineer Filippo Brunelleschi to establish the laws of perspective, which had a huge impact on Renaissance painting – let alone the design of buildings ever since.

It was glass beakers that helped to create modern science, creating knowledge and cures for diseases, and the microscope and telescope, invented in the 16th century, advanced our understanding both of our world and the cosmos beyond.

Let’s also celebrate the humble window, and not just for keeping the elements out.  Glass windows, which became more widespread from the 17th century, made homes lighter and brighter – and, partly as a result, plague was eradicated from most of Europe by the early 18th century.

In the mid-19th century, glass containers allowed the French chemist Louis Pasteur to disprove the theory that germs spontaneously sprouted from rotting matter – obvious now, but a huge stride forward in our understanding of disease.

And then, of course, came the light bulb, changing our world completely.  (By the way, recycling one glass bottle saves enough energy to power a 100 watt light bulb for nearly an hour).

As a supplier of advanced glazing systems, Wrightstyle is also playing our small part in the history of glass – helping, for example, to develop safer systems to withstand fire or the detonation of a terrorist bomb.

But we’re also aware of our environmental responsibility and do what we can to ensure that, whenever possible, all waste materials from our facilities are recycled.  Indeed, the UK now recycles well over 1,500,000 tonnes of glass bottles every year – an annual reduction of some 385,000 tonnes of CO2 emission, equivalent to taking more than 120,000 cars off the road.

Data published in 2015 by the European Container Glass Federation (FEVE) found that the EU28 average recycling rate for glass packaging hit the 73% mark for the first time.  The UK rate was 68%.

So, although the UK lags behind some European countries, the good news is that waste glass, or cullet, is 100% recyclable, and can used again and again for a whole variety of glass products. But we can and should be doing more – and that means all of us involved in the building or demolition industries.

Which is why I’m going to raise a glass of codswallop to our see-though friend, glass, and suggest to the powers-that-be that the UK should also have a glass recycling month – to help raise awareness of the wonders of glass, and encourage greater responsibility for its disposal by both companies and individuals.

Why codswallop?  Well, that’s all down to the Victorian engineer Hiram Codd who, in 1872, patented a glass bottle which could be filled under pressure and then stoppered with a marble.  It was a hugely-popular invention and used mainly for fizzy soft drinks.

In the 19th century, cheap beer was called “wallop” – and, so the story goes, beer drinkers dismissively called the contents of the new-fangled bottles as a “load of codd’s wallop.”

It may not be true, and it’s completely irrelevant for glass recycling month.  But it’s a lovely useless glass fact.  For once, let’s copy the Americans!

Does anybody out there agree?