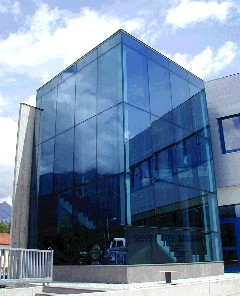 Light and glass go hand in hand. Most building materials have weight and mass, whether concrete, a brick or a length of structural steel. There is, however, one building material that has neither weight nor mass.

The Greeks called it Helios, the Romans Sol and, despite forming over 98% of the solar system, it is technically a Yellow G2 Dwarf, one of over 400 billion other stars in just our small corner of the universe.

It takes light from the Sun about eight minutes to reach Earth or 1.3 seconds for reflected light to bounce from the Moon, and without it we would be in a cold and dark place.

In terms of building design, the Sun’s generosity was recognized by the 20th century architect Louis Kahn who once remarked, “the sun never knew how great it was until it hit the side of a building.”

Another iconic designer, Le Corbusier, said that “architecture is the learned game, correct and magnificent, of forms assembled in the light.”

It adds up to an architectural philosophy that’s about how we integrate the internal and the external of a building to create structures that bring the outside inside, making best use of ambient light, and creating spaces most conducive for work, rest and play.

First Extensive Use of Glass in Buildings

Two of the first modern buildings to embrace that philosophy were the UN Building and Lever House in New York, completed in 1952, both of which made extensive use of glass instead of the traditional steel and stone.

A third soon followed: the Seagram Building, also in New York, designed by Ludwig Mies van der Rohe. Completed in 1958, with a glass façade making the building transparent and reflective, it helped to change the way that designers thought about form and function.

That changed philosophy saw light become a fundamental part of the architectural process, a shift in mainstream design perspective that was earlier championed by Frank Lloyd Wright in the 1930s. Much influenced by Japanese architecture that placed buildings within their wider context, he was one of the first to propose steel and glass construction, arguing that “form and function are one.”

He wasn’t alone. German architect Arthur Korn, wrote in 1929: “Glass is an extraordinary material. It gave us the beauty of medieval stained glass windows. Tightly held between supporting piers they opened a door to allow a glimpse of paradise in luminous colours from the shadow of the grave.

“Nothing has been lost from the richness of those earlier creations, but glass has now been associated with other materials to meet new functions. A new glass age has begun, which is equal in beauty to the old one of Gothic windows.”

Arguably, that new glass age was heralded by the Great Exhibition of 1851 and Sir Joseph Paxton’s Crystal Palace, essentially a giant greenhouse with some one million square feet of glass. What made it possible was the recent invention of cast plate glass, a cheap but strong glass type. For the first time, a commercial building of considerable size – over 550 metres long and nearly 40 metres high – had been constructed almost entirely from glass.

Only thirteen years later, Oriel Chambers in Liverpool was completed, recognized by many as the first example of metal-framed curtain walling in the UK. Now Grade 1 Listed, an 1866 article in The Builder was less than complimentary: “The plainest brick warehouse in town is infinitely superior as a building to that large agglomeration of protruding plate-glass bubbles termed Oriel Chambers.” So, it didn’t please everyone.

But Arthur Korn’s new glass age is still with us, as glass and framing systems have continued to evolve, driven by changing perspectives of urbanism and new architectural thinking. Not least, glass has evolved to deal with both threat and opportunity – from the need to make buildings safe from terrorist attack to providing, for example, thermal comfort and improved air quality.

Light and Glass Come of Age

Modern glass composites have near-perfect optical quality and can stop a fire for two hours or more, prevent bullets from passing through – and withstand the detonation of a high explosive charge. Glass is, however, merely a go-between – a translucent membrane between an interior space and the world beyond.

What joins the two is a weightless building material that is ever-changing and infinitely more important, giving context and meaning to our surroundings and the buildings in which we live and work.