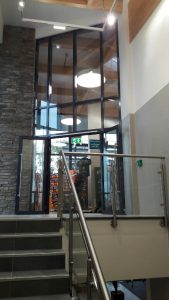 The newly-opened store in Swords, north of Dublin, follows a completion earlier this year in Banbridge, Co Down, Northern Ireland.

Wrightstyle supplied both fire-rated curtain walling and unlatched doors to its customer Lynch Windows Ltd of Co. Donegal for the glazed elements of the new retail outlet.

Wrightstyle’s external and internal glazing systems offer fire protection for up to 120 minutes and the company has also developed specialist systems to counter ballistic or bomb attack.

Lidl continues to expand in both the UK and Republic of Ireland.  It’s estimated that Lidl has contributed €1.5 billion to the Irish economy in the past 16 years, and intends to have 1,500 stores in the UK.

“Our systems are ideal in a retail environment, especially our SR60 fire resistant curtain wall, because they offer both fire safety and energy conservation,” said Lee Coates, Wrightstyle’s technical director.

“Our systems are specified in a number of worldwide jurisdictions, reflecting both our reputation in the advanced glazing market, and our investment to achieve a range of international accreditations,” he said.