We’ve just completed a major contact for WeWork, which provides private and shared office space across the world.

We supplied some £100,000 of wet fill EI30 double doors, and single doors, for their new London property close to Waterloo Station.

In the UK, WeWork has offices to rent in Edinburgh, Manchester and London.  In London alone it has nearly 50 properties.

The contract was for 10 double doors and seven single doors, all integrity and insulation, for our client Prism Glass.

The WeWork property is in Southbank Place and WeWork Waterloo is, the company says, the world’s largest co-working space.  It provides a variety of facilities for both corporate and start-up businesses. 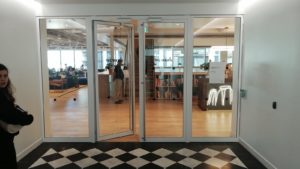 WeWork, which started in 2010, provides spaces for everyone.  That can be entrepreneurs setting up their first businesses to multinational conglomerates.

It now has properties in 37 countries internationally.  Its mission is to create spaces where people can work, come together and collaborate on projects.

The WeWork project was large and prestigious, reflecting how office work is changing.

For example, the number of self-employed workers has been growing in the UK since 2001.  They now account for around 15% of the working population.

Following the recession, the number of self-employed workers aged 65 and above has nearly tripled.

Young people are also keen to become their own bosses.  The number of self-employed workers aged between 16 and 24 has nearly doubled since 2001.

The largest number of self-employed workers overall are aged 45 to 54.

One of the drivers of self-employment has been new technology. Wi-fi, cloud sharing services and video calls mean that people can work from anywhere and at any time.

WeWork has been at the forefront of that agenda of corporate change, providing space for new and flexible ways of working.

Our range of advanced glazing systems, for both internal and external applications, provide a perfect blend of aesthetic appeal and safety for any project.