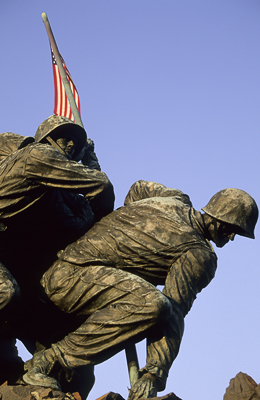 A Glass Chapel of Distinction

It is a fighting unit with a legendary and illustrious past, with just over 240,000 serving personnel, including reservists.  That’s larger than the entire British Army.  It is the US Marine Corps and its motto is Semper Fidelis, always faithful.

It is a family like no other because, even when you leave the Corps, you faithfully remain a Marine for the rest of your life. Among its veterans are US Congressmen and Senators, Olympic athletes, captains of industry, and no fewer than 25 astronauts – including John Glenn, the first American to orbit the earth.

Famous Marine actors include Gene Hackman, Harvey Keitel and Steve McQueen.  The film director Sam Peckinpah was a Marine – as were Lee Trevino, the golfer, Leon Spinks, the boxer – and authors Leon Uris and Robert Ludlum.

The Corps has a central place in the affection and gratitude of Americans.  Its most iconic image is the Joe Rosenthal photograph of the US flag being raised on Iwo Jima in World War II.  In that epic battle, the US suffered 26,038 casualties, more than the total number of Allied casualties on D-Day.  The last Japanese soldier on Iwo Jima only surrendered in 1951, six years after the end of the war.

What makes the Pulitzer Prize-winning photograph especially poignant is that, of the six men depicted – five Marines and one Navy sailor – three did not make it off the island alive.  It is the most reproduced photograph of all time.

Given the history of the Corps, the decision to build a memorial chapel to remember the sacrifice of fallen Marines was going to be a supreme challenge for its designers, the architectural practice of Denver-based Fentress Architects.  However, when the new $5 million chapel opened at the end of last year, it did so to universal acclaim.

The Semper Fidelis Memorial Chapel, in Quantico, Virginia, sits in extensive grounds that also contain the National Museum of the Marine Corps.  Quantico is also home to the Marine Corps Combat Development Command, the Presidential helicopter squadron, the US Drug Enforcement Administration’s training academy, and the FBI Academy and Laboratory.

The National Museum of the Marine Corps welcomes thousands of visitors every year, and houses over 1,000 artefacts including tanks, aircraft, small arms, uniforms and more than 1,800 photographs, letters and illustrations.  Overlooking the museum is the Semper Fidelis Memorial Park, with the new chapel at its heart.

The small 77-seat chapel, framed in Douglas fir, is intended to add a humanistic touch to the museum, providing a non-denominational and contemplative place for Marines and non-Marines alike.  Now complete, work began on the chapel at the very end of 2008.

The building is simplistic, with timber columns rather than heavy pillars to lighten the architecture.  Adding to an interior filled with light, the spaces between those columns are filled with large-span translucent glass, offering views of the trees and countryside that surround the chapel.  The concept behind the design is that it should be a “transparent chapel in the woods.”

Blending the interior and exterior is deliberate, and intended to echo the design of improvised field chapels still found in today’s combat zones; a reminder of courage and sacrifice dating back over 200 years.  In that sense, the building itself is about the fragility of life.  Marines may be warriors, but we are also all human.

However, the illusion of fragility is itself an illusion.  Underneath the wooden frames that appear to hold the glass in place is a hidden framework of high-tensile steel.  It’s that steel framework, coupled with optically-brilliant, laminated glass that allows for the large spans of glazing to be achieved.

My company, Wrightstyle, has been at the forefront of developing such specialist glazing systems for some years now, and we are immensely proud that our US distributor, Hope’s Windows NY, was chosen to make real the design vision behind the Marines project. 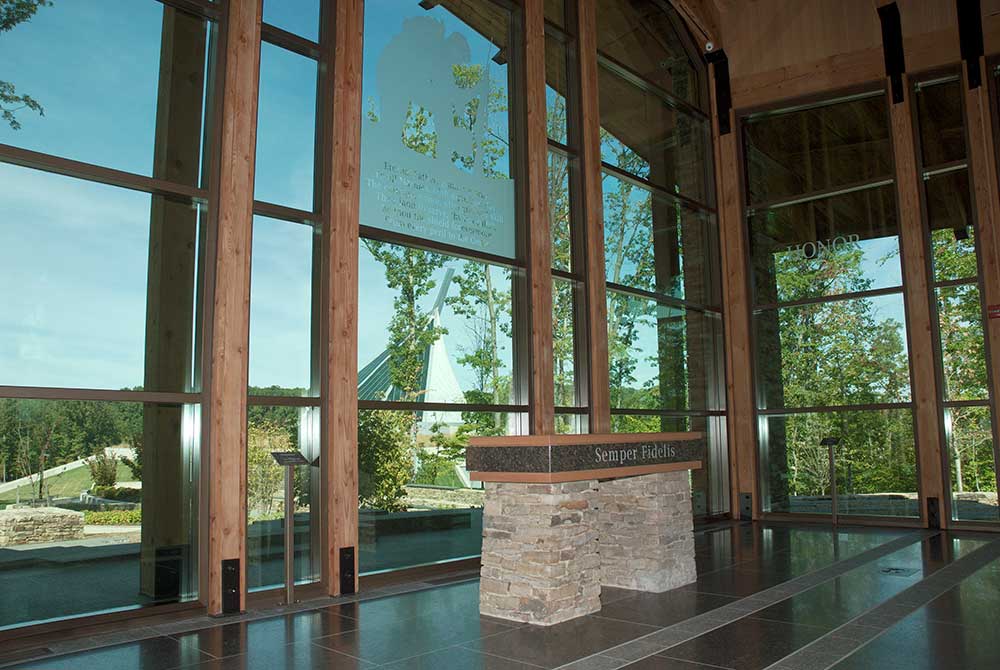 The US Marine Corps knows a thing or two about sacrifice and their memorial chapel is perhaps an appropriate place – filled with light and looking out at tranquil landscapes – to remember the sacrifice of the fallen, and to hope for a better and safer world. 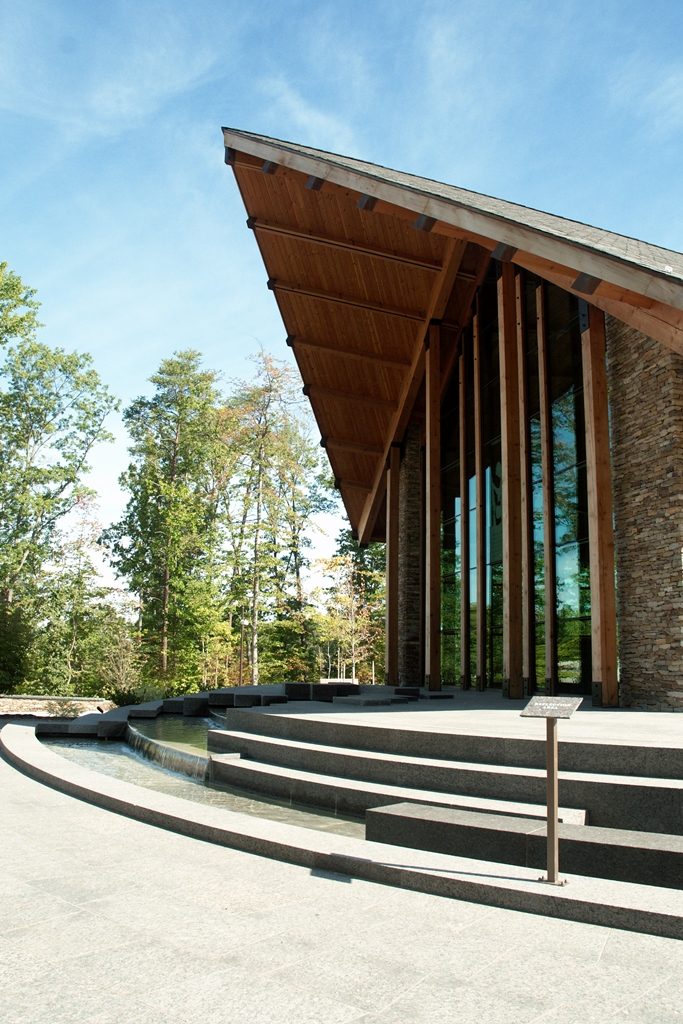 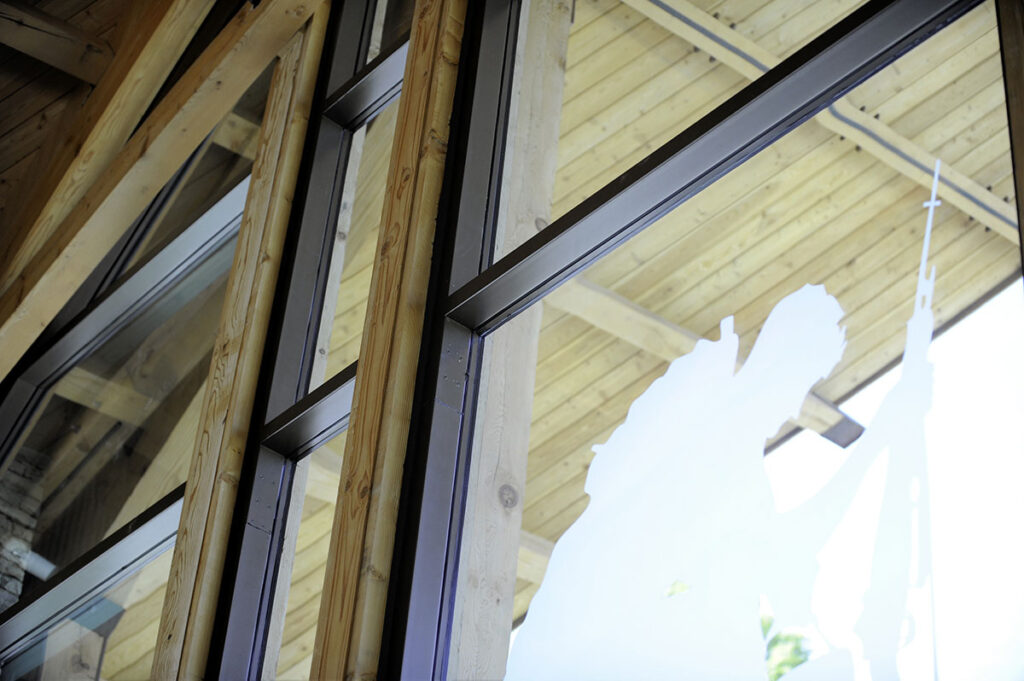 We’d be grateful if image credits could be given:

The image from the Marine Corps memorial, of the flag being raised on Iwo Jima, is supplied courtesy of Joe Vogan Photography.

All other photogrpahy : Ben Rasmussen Photography.