Architecture creates cityscapes, shaping our towns and cities so that they reflect our corporate and civic aspirations.

It’s a design approach that interprets the past to create new buildings with contemporary relevance.

But within that philosophy of architecture as a mirror to the future is a new dynamic.

Because there seems to be one not-so-subtle difference of approach between east and west.

Maybe it’s about how we see modernity and what we believe the future should look like.

Shakespeare or Wren, looking down at modern London, would still recognise the medieval street layouts.  Some still have their original buildings.

The structures that have grown up around them mainly stand within that continuum.  For some reason, by and large, we value the best of the past.

In the east, it’s been a different story.  When modern prosperity came to Asia, it came with mind-blowing intensity.

It also came with an overwhelming urge to rip up the old and rebuild from scratch.

Across the Middle East and Asia, old towns and cities were simply bulldozed.

But in the rush to rebuild, against a background of enormous economic growth, there is only one kind of building that can arrogantly shout out modernity.

It’s a building that’s a visible shorthand for everything that the modern world can offer.  The supertall skyscraper.

Of the world’s top ten tallest buildings, only one is outside Asia and the Middle East.  That’s New York’s One World Trade Center (Number six on the list, at 541 metres).

Top of the tallest remains the Burj Khalifa in Dubai, at 828 metres.

The other eight are in Shanghai, Mecca, Shenzen, Seoul, Guangzhou, Beijing, Taipei and Shanghai,

But Japan also has ambitions, with its concept for the 1,700-metre literally-named Sky Mile Tower. 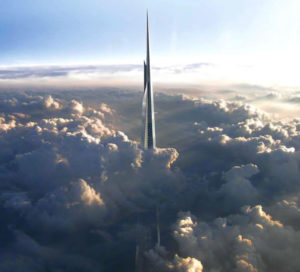 It’s a philosophy of building ever-upwards that can only partly be explained by burgeoning urban populations or the availability of suitable land.

Jeddah, for example, sitting on the edge of a desert, hardly has much need to build a kilometre into the sky.

This is the first of a two part article, looking at a striking difference between east-west difference in architecture. In my second article, I’ll look at the supertall skyscraper as a projection of economic power.